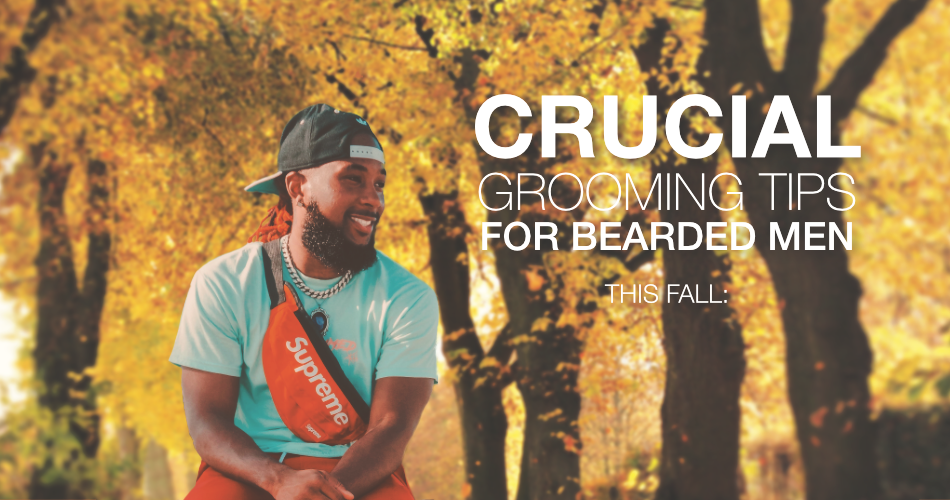 Save some time and hassle with a few tips to help avoid the dry skin, too-many-layers, and scarf-beard blues that come along with cold winter months.

Everyone knows, you should never go into the winter months unprepared. It’s a thousand-year long lesson that mankind’s known for a very long time. Yet, guys are still breezing through the summer months while headed into fall without making any preparations for their beard and the skin below it!? After a whole summer filled with sunshine, salty beach water and chlorine filled pools; the skin isn’t prepared to handle a sudden cold snap. You’re in for months of itchy dry skin not only in your beard, but all over! Because changes in the colder seasons effect your skin, causing it to become tough and dry in response. In this post you’ll learn how to stay fresh all winter, with practical ways to make preparations for the season ahead. Coming off an entire summer of averting oily skin and getting good at it too. You’ve made a reliable beard routine built on some essential beard-care products. At this rate, you might be able to stay model-fresh all winter and ride straight through to next summer. All without ever skipping a beat, plus getting a jump start would make next summer even better!

That’s when you begin to subtly notice, just in the middle of your back is ……. itchy for some reason? Elbows, knees & knuckles all begin to show undeniable signs of ashiness. That’s when you realize Winter-dry skin has you in its grips! At first you decide it’ll go away on its own, give it a couple of weeks and it should work itself out. Right? After becoming too annoying to ignore, you reason that It must be the bedsheets! It couldn’t have been more than a few days since their last wash but hey, that must be it! Well past several bedding cycles you’re finally motivated to take drastic measures. Reaching into the cabinet underneath the sink until you produce a years-old bottle of cheap hand lotion, haphazardly applied attempting to relieve the now insect-like persistence of the itch. In defiance of your efforts, the dryness just grows worse. Rough, flakey skin is now visible around the edges of the beard and…there’s dandruff too. In the morning you notice that all of the hairs in your beard seem to have little broken ends, Hmh? One cold night, you head to a party at a friend’s hi-rise. Once you arrive, it’s plain to see that the argyle scarf that goes with your shoes has smashed those already brittle beard hairs all over the place! You dash for the nearest moment of privacy to quickly comb out the damage. Later - the party’s going great, so a few daring people decide to head towards the roof top and turn up! Back inside the party, the heat feels like its set on “Hell”. Each drop of sweat that makes its way down your back symbolizes the regret of only wearing a substantially thick sweater and a cumbersome coat. Also, under the kitchen lights its really noticeable how many flakes are on your chest. Unexpectedly, the friend you were hoping to re-connect with busts out laughing as she grabs onto your soggy-wet body, all across the low back! Almost immediately, she recoils with a sudden shift in weight. Just staring at the clearly visible pit stains & flakes, while giving your sides a couple more squeezes. She slowly pulls away while trying to mask the disgust in her face.

By making a few simple preparations for fall, you can skip the horror stories and add to your highlights.

A problem the non-bearded population is unaware of, is the issue of Scarf-Beard. A situation where ones beard will contort and become mangled by the scarf needed during the colder seasons. Thankfully, there’s a few ways to wear a scarf that aren’t beard wreaking. Keep in mind this is a truncated list as there’s many creative ways to attack scarf-beard. The folds detailed here are timeless sure-fire approaches.

The Drape, aka Swag Mode:

Lay the scarf around your neck with both ends being equal lengths…..That’s about it for this one, dead simple. It avoids the beard altogether but provides a masculine look with some cold resistance.

Once Around, aka Instant Ninja Mask:

Position the scarf around your neck with one end being shorter. Throw the long end up & over the opposite shoulder, bringing it around your neck & back to the front again. Be sure to lay the scarf flatly across the beard to avoid mashing it up.

Reverse Drape, aka The Cloak:

Set the scarf around your neck with both ends being equal again. Now toss one end over the opposite shoulder. Do the same for the other end. Keep the folds going across the beard flat and smooth.

Even with these great techniques, something might still mush up the beard. In case that happens you should aways have some tools on hand for quick fixes. This set from Beard Care Gang includes several vital tools for beard maintenance which are designed to create a professionally styled look.

Layering your clothes in the cold months is always the best move, especially for guys who’s body temp is furnace-like. Similar to prepping for a hike, you should aim for a 3 layer system.

For dealing with the unknown and preventing any unwanted pit stains try the Thompson tee. It has built-in under arm pads that block sweat and deodorant from ruining your shirt. Plus, it evaporates the built up sweat to quickly cool you down and control body temp.

It’s a good idea to split this layer in two, giving it even more flexibility. Think of a button up & sweater combo.

This should be the primary cold defense. Something like A hard shell parka, Shearling jacket or an old school Triple Fat Goose.

That dried out beard doesn’t have any spring or bounce to it. That’s why it’ll take the shape of anything you put it in, like cats in a shoe. Try the beard shampoo & conditioner from Beard Care Gang. The infused essential oils in the shampoo will rid any beard of dirt and flakes without causing dryness. The beard Tamer & conditioner is lightweight and provides plenty of slip to detangle and soften a tough beard. For your skin, go with a soap that’s high quality and not full of irritants. Look for ingredients like tea tree oil, which kills fungal issues (athlete’s foot, ringworm, etc). A Castile soap like the one from Dr Bronner’s

Adding a body lotion to the mix gives the skin an additional layer of weather-proofing. Vaseline Intensive Care Cocoa Radiant is an Amazon best seller for a reason. They’ve added micro-droplets of Vaseline Jelly with 100% pure cocoa and shea butters. Sounds wild, but it’s a non-greasy body moisturizer that works.

The beard equivalent of lotion would have to be a beard balm. An ideal treatment for growing and maintaining a great looking beard. Check out the one from Beard Care Gang otherwise you’ll find yourself searching for “What are split-ends?” later tonight.

Picture you back at the party just after arriving. Peeling off that well folded scarf to reveal a pristine beard with a look that’ll be on Instagram search no doubt! Headed back inside from the rooftop craziness, skin glistening with moisture. You shed that heavy sweater, allowing the under shirt to start cooling you down as it protects from those pit stains.

That’s when a free-flowing joke gets an unexpected laugh! Your friend grabs onto your body, trying to brace herself from the weak-kneed laughter, only this time she can’t help but notice the gripping scent from your beard. These are the tools to outsmart Winter dryness and stay fresh all winter. Like a superhero, you stand there with fully moisturized, Winter-proof skin. Able to adapt your temperature to any environment, boosted by beard-shielding scarf techniques!

Now if you can just get over that cold from being outside at the party (Ah,Choooo!)

GO BACK TO BLOG >